A struggling Hollywood writer and her grandmother enter a dangerous pact…a child gets a disturbing education in the attic…a pair of bandits flee across a desert…a strange arrival upends a family in 1800’s Boston…a pair of werebears disobey the dictum of their clan…a celebrated inventor raises the suspicions of an older mentor…an aging medium and a deceased Rastafarian embark on a road trip….

Pull the blankets to your chin and settle in to this medley of fourteen weird tales, a loving homage to Stephen King, The Twilight Zone, and Tales from the Crypt. This mix of five previously published stories and nine hot off the presses are guaranteed to chill your bones and disturb your sleep.

Buy your copy now at Amazon.com.

My story “Charlie in the Attic” appears in the just published, “Night Terrors Vol. 16: Short Horror Stories Anthology“. (The cover is . . . a bit much.)

I’m particularly proud of this story. In it, young Charlie wants to start elementary school, but receives an entirely different education in the attic instead. The publisher is releasing it in e-book and print-on-demand through Amazon: https://readerlinks.com/l/1921330

…And an audiobook is in the works. A first for me.

If you’re interested in a free digital copy of the book, contact me. And thank you, as always, for your support.

A sequel to the hit book, Super Cooper Saves the Day!

A little boy with a big personality . . . that is Super Cooper!
Cooper Busch is a loveable, energetic boy, born with Down Syndrome and diagnosed with Acute Myelod Leukemia. Super Cooper spreads smiles through town with his family and friends. He walks in the Hillcrest Booster Day parade; gives bubble machines, capes, and books to kindergarten classes; helps to build the Super Cooper Playground; host Cooperpalooza; and raises money for families who have been impacted by childhood cancer.
You can be a superhero like Super Cooper—just think of what you can do to make someone smile!

All proceeds go to the Super Cooper foundation.

Level Up and Die! (But the Print Edition) (Buy the E-book)

Twelve-year-old Steve Silver is an average kid, just trying to survive middle school. He’s a video game connoisseur who takes pride in knowing something about everything in the video game world…yet he’s never heard of Pirate Raiders.

His questions about the game result in stern warnings from Jerry, owner of the local video game store, and when Steve’s friends act strangely after binging on the game, something sinister seems afoot. Meanwhile, pirates are popping up around the world, wreaking havoc—even in Steve’s small city. He sees a connection between the game and the pirates. After his friends go missing, he learns the truth.

Now Steve, Jerry, and Esperanza, Steve’s middle-school crush, must enter the game, rescue his missing friends, and stop the pirate epidemic before it’s too late.

It started as a challenge. On a lazy summer day in 2019, Russell Richardson challenged Sam (then 11) to watch an R.L. Stine MasterClass and use the advice given to devise a story. Sam agreed . . . begrudgingly. When Sam described his big idea, Russell heard its promise. Together they outlined a Goosebumps–y novel…and that was the limit of Sam’s interest. Dad, however, could not bear to waste all that hard work. With Sam’s blessing, Russell proceeded to write the creepy YA-video-game-pirate-adventure book they had brainstormed together. We hope you enjoy…Level Up and Die!

If you want to learn more about the book, order discounted copies, or schedule an author appearance, send us a message through the form below.

My story “Rockhammer of the Gods” appears in the horror collection, 101 Proof Horror. Order your copy from Amazon. It’s thick! And loaded with great creepy goodness!

Abel’s Way
Abel James Williams, born April 29, 2013, was a compassionate, intelligent, and courageous boy. He loved outdoor activities, race cars, animals, documentaries, and sitting quietly for hours building intricate structures out of any material available. Abel was a natural-born leader, inspiring his friends and everyone who met him, and entertaining them with his vibrant sense of humor. Although Abel was diagnosed with a type of cancer called Neuroblastoma, he never felt sorry for himself and continued to see the best in the world. We should all be more like Abel! Abel was a warrior and fought his cancer valiantly. He passed away on January 20, 2018, but he will be remembered forever by those who knew him. This book commemorates his spirit and the lessons he taught by example. Abel’s family is donating all proceeds to Neuroblastoma research.

The Many Adventures of Mya
Mya J. Corigliano was born in Rome, NY, on May 8, 2016. She had a passion for life and was always smiling. She will be remembered for her mischievous smile, beautiful blue eyes, and messy hair. Her strength and fearlessness made her a true superhero, who courageously battled cancer. She went to join the angels on December 19, 2017. This book celebrates her life. All proceeds go to the family.

Don’t forget that I’ll be signing copies of “Super Cooper Saves the Day” today at Shop 607 at the Oakdale Mall, Johnson City, NY. I’ll be there from 1-3pm. If you plan to grab a copy at the store, arrive early because supplies are limited. More books can always be purchased at Amazon.com. I’m excited to meet Super Cooper fans! 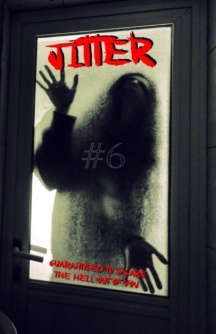 “King’s Tavern Blues” is an early story that I had forgotten, frankly. So it was a true surprise to learn that Jitter would be including it in their 6th issue of short stories. Not a tale for the faint of heart! Please consider buying a paperback copy of the issue here.

My horror story “Sizza’s Clippaz” appears in the Yellow Booke Journal, Volume 6. The publisher planned to create an illustration for my story, but was gracious enough to allow my son, Oliver, to produce something instead. With sincere objectivity, I say Oliver’s piece is the best in the book. Thank you to Grant Kellermeyer for making this proud-papa moment possible–and for publishing my story. ‘Tis joy squared. END_OF_DOCUMENT_TOKEN_TO_BE_REPLACED