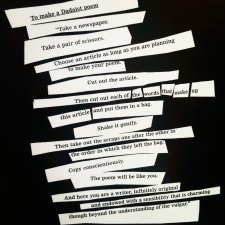 The idea for this post came while watching an episode of Luther. In one scene, Luther has spread crime photos across the floor. A detective enters, asking why the mess. Luther says he’s using the David Bowie decoupage technique. (I’m roughly paraphrasing, so forgive any inexactness.)

I ran to the internet to verify that Bowie was, in fact, a cutter-upper, and then to see his application, if possible. END_OF_DOCUMENT_TOKEN_TO_BE_REPLACED 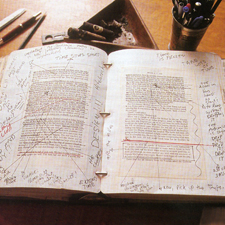 Francis Ford Coppola has published the notebook that he used while making The Godfather. This thrills me because I’ve repeatedly viewed a YouTube video of him displaying the notebook. Watch the video here. https://www.youtube.com/watch?v=awce_j2myQw

Years ago I downloaded the video so I’d have it if ever it was removed. That’s how much I love this clip.

Seeing the effort that went into a masterpiece always encourages me. We’re often led to believe that great works are immaculately created. In truth, most, if not all of our favorite things, resulted from diligent, hard work. That gives hope that by applying time, focus, and knowledge of craft, plus challenging my imagination repeatedly, then good–maybe great–works are possible. That’s the hope, anyway.

END_OF_DOCUMENT_TOKEN_TO_BE_REPLACED

Reviewing old notes in my Evernote account, I found a collection of quotes from Write like the Masters, by William Cane.

The book collects facts about the writing habits of famous writers. Go get a copy of the book at Amazon. It’s fantastic.

Here is what I noted about the master, Ray Bradbury. As memory serves, some text comes directly from the book and some I paraphrased. I’ll add commentary at the end.

“When Ray Bradbury wrote his first draft he didn’t simply write quickly and without censoring himself, he actually purposefully overwrote, trying to come up with multiple takes on sentences and figures of speech, for instance, which he intended to prune and edit later. . . . ‘Sometimes I give myself, on a single page, 4, 5, or 6 similes which by the fifth draft, dwindle down to one or two really good ones, for proper emphasis.’ He overwrote so that later, when in ‘editing mode,’ he could choose the best phrase or the most apt figure of speech; in effect during the first draft he made his own thesaurus of words and phrases, from which he selected later while reviewing his work.

END_OF_DOCUMENT_TOKEN_TO_BE_REPLACED

As a kid, I collected comic books. I can’t count how many had covers that boasted, in exploding fonts, a collision of “Fire vs. Water!” or “Muscle vs. Metal!” Why were these contrasts of force so common? Because they’re easy and surely the writers were deadline-driven. But beyond that, these couplings are rich with conflict. Each side is an intrinsic obstacle to the other. END_OF_DOCUMENT_TOKEN_TO_BE_REPLACED

Here’s a tip for when writer’s block has seized you in creative paralysis.

One day this past summer, I suffered from a mid-story blockage. I’d written what felt like half a story, but was unsure of where the action should go, unable to see what my characters should do. Taking a break from doing nothing, I watched the trailer for Aaron Sorkin’s Masterclass. In the clip he tells the group of writers to toss out lousy ideas (paraphrasing). Like a wet gob of paper shot into the eye, the solution to my struggles struck: Spitballing. END_OF_DOCUMENT_TOKEN_TO_BE_REPLACED

Do you struggle to shape your disparate ideas into book-length plots? Get practical advice on how it’s done from the guy whose Star Wars books inspired the upcoming film.

For almost two decades, I obsessively read books and blogs about writing in search of clues to unlocking genius. A few years ago, I realized there must also be podcasts about writing–still a new media form at the time. Sure enough, I searched a keyword combination that led to just such a podcast, produced by Michael Stackpole.

END_OF_DOCUMENT_TOKEN_TO_BE_REPLACED 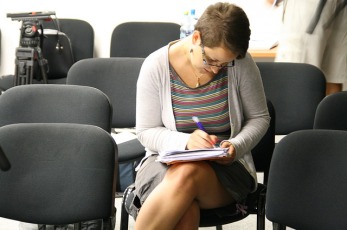 Reporters fascinated me as a kid. I’d see them on TV, at press conferences or interviewing pedestrians or whatever, and they clung to every word. And their tools of the trade were glued to their hands: the pen and notebook. END_OF_DOCUMENT_TOKEN_TO_BE_REPLACED